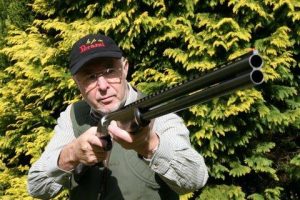 CASH IN YOUR POCKET!

Many thanks to many of my customers who have recommended my guns to their friends which has resulted in some nice extra sales. Over the last few years, media advertising has less effect than in the past and my trips to shooting grounds around the UK still is my best way of getting out to interested shooters.

I am raising my ‘Referral & Commission’ stakes to anybody recommending a customer that materialises in a sale, a cash bonus of between £250 and £1000 depending on the model.

No quibble, no excuses. If the sale goes through the bonus is yours. Call me for details. 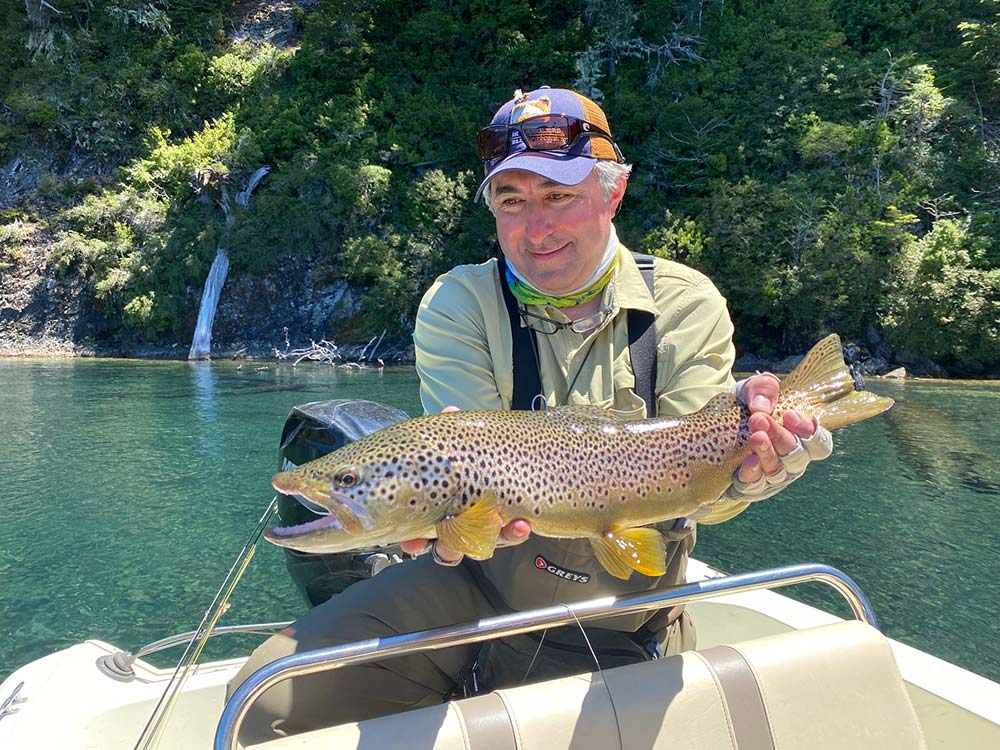 One of my DSR customers, He also likes fishing 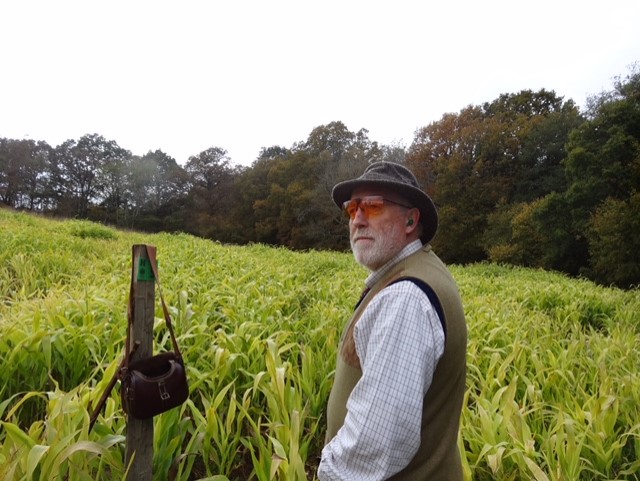 Last Friday, 19th November 2021 was a very sad day. My good friend and shooting helper, adviser and gun enthusiast like me, took my place on a day’s shooting at my local game shooting syndicate at Glynde in East Sussex. After a great start and what was hopefully going to be a great day, Steve suddenly suffered a heart attack from which he did not recover. Having just enjoyed the morning’s shooting, he was walking towards other members of the shooting party when he suddenly collapsed. He had just shot a good bird and was very happy, smiling like he always did. Steve’s passing was instant and he did not suffer at all and this happened on the shooting field which would have been Steve’s wish should he have been able to arrange it.

Steve and Jackie, his incredibly loyal partner, were great friends of mine and they both had developed a habit of coming to my shooting range a couple of times a month for the last few years. While I was attending to customers, Steve and Jackie had the run of my traps and always enjoyed a considerable amount of shooting, around 5-600 between them on some occasions at as many different targets that I could muster up for them. They were pretty good too. They were also well known to many shooting grounds: Churchills, Gunsite, Hangmans Stone, AC Sporting Targets, Sporting Targets Bedford amongst others and they always made great company. Anyone who met them at such venues was always greeted with huge enthusiasm and friendliness. They were so keen and so easy to talk to that many of my customers have said to me on many occasions, ‘saw your friends Steve and Jackie at a shooting ground last weekend, shooting your guns of course.’ They will be sorely missed as a couple to see at these places but we all hope that Jackie will continue to participate as she did with Steve, with as much support as we can muster.

I would like to just say a big thank you to all the helpers at this sad event, a superb team from the NHS, the police and a helicopter team (as this all happened across the fields far away from any road, one NHS vehicle even got stuck) who all tried their best to keep Steve with us but were unable to do so. Graham, Mike and Peter were supremely diligent in dealing with the situation as it developed along with all the other shooters, beaters and Spud, our gamekeeper.

Steve was a great shooter, great engineer (he always had something to say about my various ideas etc) and a great friend. Our thoughts are with Jackie and all the surrounding family. 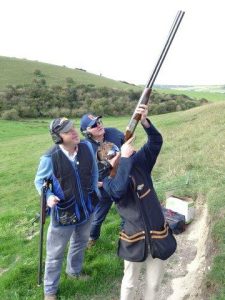 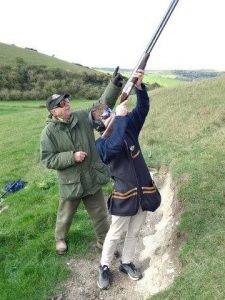 Archie Alexander, my grandson, showing his father and I how to shoot the HVR.

Now that’s how you mount a gun, right into the cheek.

Could be expensive dad. 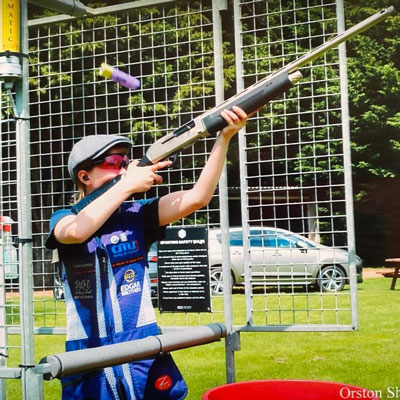 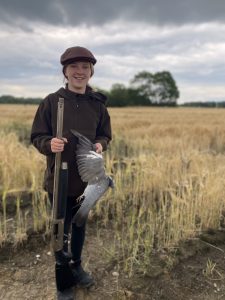 Fern Lancaster – someone to watch for in the future!

On my visit to the Gamefair last week, I was fortunate enough to meet a lovely family whose charming daughter Fern and I spent some time talking about her excitement and already some early successes in taking up the sport of shotgun shooting. As you can see from the picture, she can already mount a gun pretty well (better than some of my experienced customers) and is already putting in some pretty good scores for an 11 year old beating many juniors of the same age and older. Watch out lads is the warning she (and I ) have for you. She did pretty well at the Gamefair and is on your heels so watch this space, you will see more of her in the future. Keep at it Fern, you can beat them. 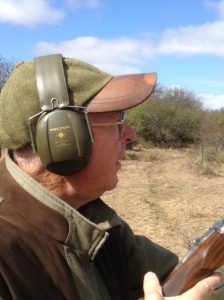 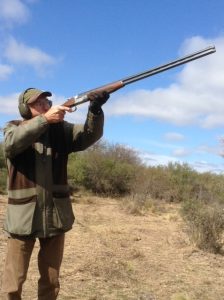 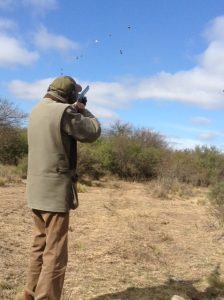 THE P&V HVR20,
IT CAN’T GET BETTER THAN THIS

I am very lucky to have just returned from a trip to Argentina shooting Doves. It’s been said that it’s too easy, boring and not worth the effort. (Dreadful flight times.) I beg to differ. Apart from the flight, the trip is one of a lifetime. The targets are amazing from fast hedgehoppers jinking and twisting and very hard to the highest tall screamers 60 yds up and beyond. If you take your time selecting the best targets and are not interested in great numbers, this is possibly the finest shooting I have been lucky enough to experience. And, most important, the HVR just did exactly what I have been saying for some time. It handled like no other game gun I have experienced and it really proved its worth beyond doubt. I have to emphasize once again, the P&V HVR 20 I believe is the finest 20 ever to hit the market. I had some great colleague comments too with a some other members of the team taking a shot or two, showing considerable surprise as to how it handles. 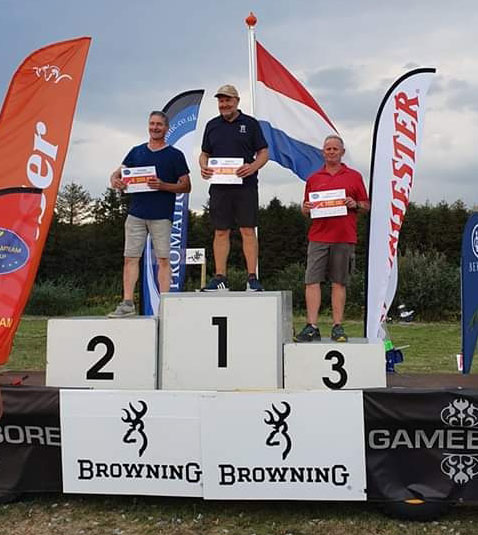 ANOTHER GOOD SCORE FROM KENNY BENNETT

3RD in the Dream Team cup competition last weekend in Holland.  Kenny (on the right) now shooting his HVR even better.  Well done. 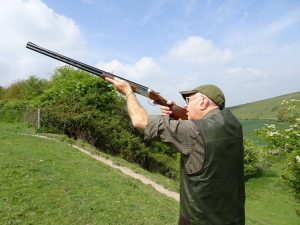 If you are looking for the best handling, best shooting and the best custom shotguns currently available, come and see me at the above event and have a go too. I will be there 31st May, 1st and 2nd June. Visit their website here.

THE BEST 20G SHOTGUN EVER ?

Last autumn I took delivery of a new Perugini & Visini 20G game shotgun in the HVR design. It was my intention to use it for game shooting as I now find it a little tiring to use a 12g all day as age creeps in. I have been tuning and adjusting this new gun to my personal measurements and have now completed the work. I have been using and handling shotguns for nearly 60 years and I can not recall having the same thoughts about any other shotgun for game shooting like I have for this one. It is unbelievably special. It makes shotgun shooting especially for driven targets, a unique experience. It is superbly pointable but easy and quick to move and somehow, it seems to make shooting driven targets and most others too just so easy. This is the best 20g shotgun I have ever handled. The best 20g ever brought to market ? I think it could be. All who have tried it so far are amazed. The HVR has established itself already in the 12g as something pretty special but this lighter and supremely superior handling and shooting shotgun has to be the number 1. An all time classic ? OK its me talking but come and prove me wrong or indeed, right. Free trials readily available. But, – if you are looking for a very special 20g game shotgun beware, once tried you won’t be able to live with anything else. 3 Only available this year waiting in the factory part finished, just waiting stock specs. 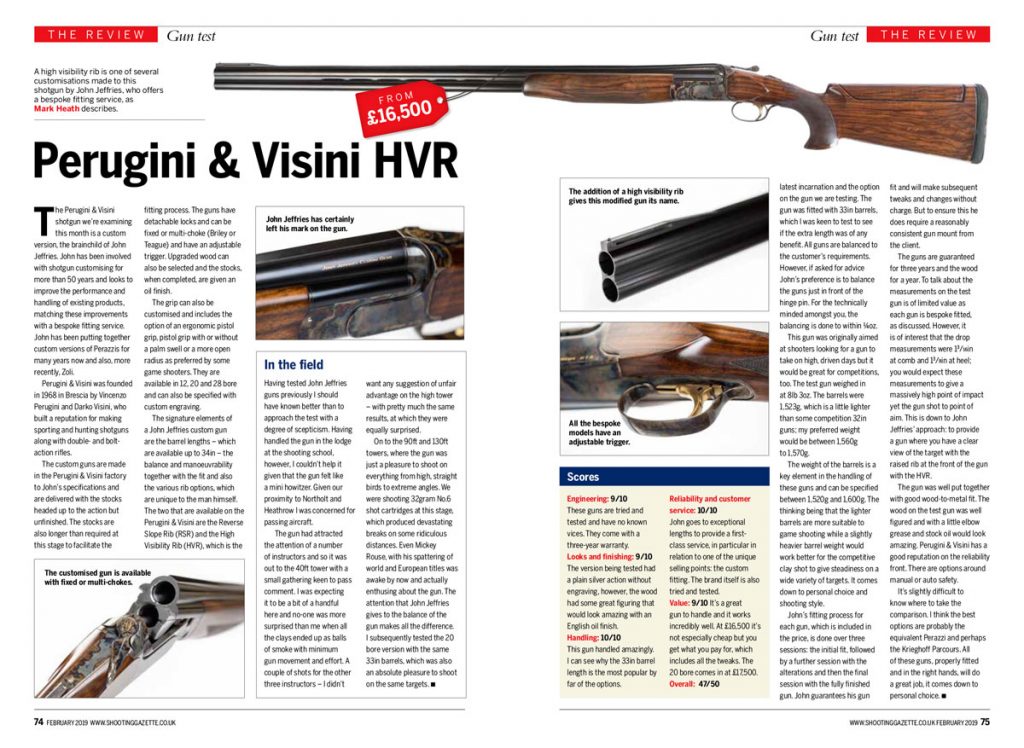 IT DOESN’T GET BETTER THAN THIS

The HVR receives another stunning review from one of the worlds best respected shooting ground instructors. There’s nothing better !!!  Just 3 available for 2019.

Please click on the image to read the review. 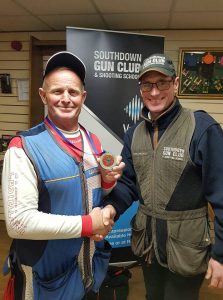 THERE’S NO STOPPING HIM! 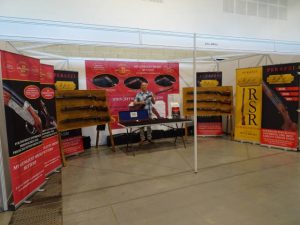 You won’t see my guns on display at the show this year, but I will be around during the show time.  I have decided that my guns always show best when handled and experienced personally at a shooting range somewhere.  Please call me if you are going and I would be delighted to meet you to discuss my full range of guns in person and hopefully then make an appointment for you to come and prove to yourself as others have that, ‘My Guns Just Shoot Better.’  I will buy you a cup of coffee too. 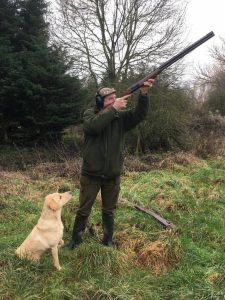 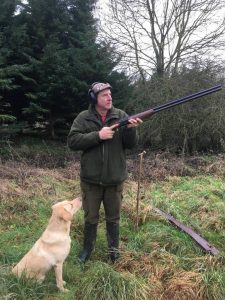 Sean Wagg took delivery of his new Perazzi SR1 on 23rd December and is of course, another delighted customer. What an Xmas present.  Mounts a gun well too! 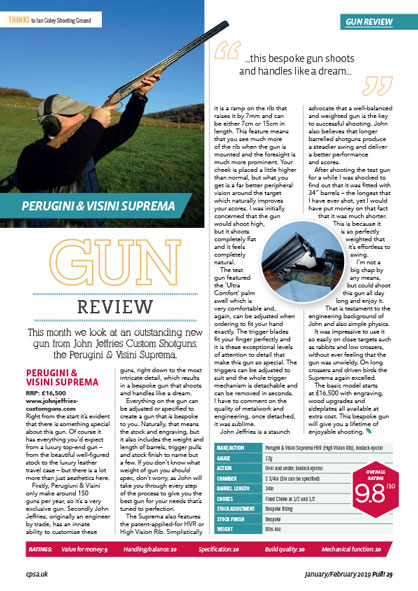 Read the latest superb review from Pull magazine. Unique 9.8 out of 10 awarded to this top performer. 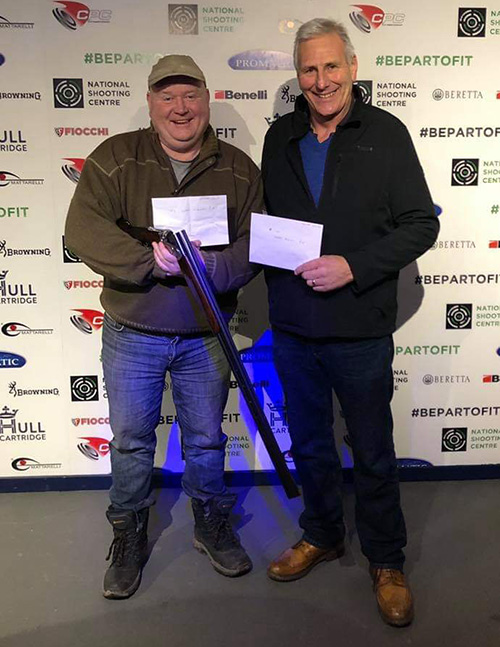 Another great win for the HVR.
Top Scottish sport trap competition Simon lead the field with a great score of 94.
HVR rules again !!! 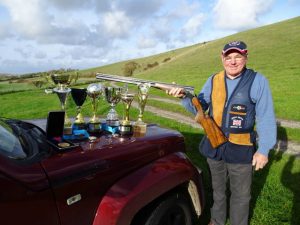 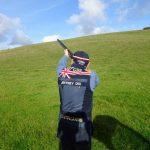 Jeff is a well known veteran on the circuit and is putting in some great scores with his trusted Perazzi RSR.  South of England sporting championship, Sussex Fitasc, 1st Cyprus Grand Prix, European Compak, World Beretta cup just to name a few.  Well done Jeff, keep it up! 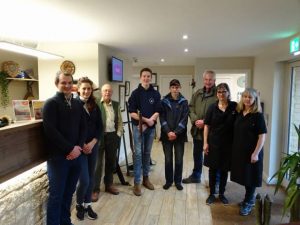 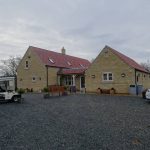 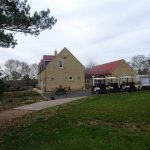 Just returned from a most enjoyable weekend at Grimsthorpe shooting ground near Bourne Lincolnshire held on Saturday and Sunday. The event was a great success with a high attendance for both the shooting offered on this very special ground and for my fitting clinic. I attended to 14 different customers giving them the very best fit possible and there were certainly one or two big surprises. One customer was shooting a gun which was 1.5″ too short and several as usual were shooting with a much too low comb. All shooters taking advantage of my fitting service well appreciated the help and advice offered and hopefully they will now enjoy better shooting when the various adjustments are made. The new clubhouse at Grimsthorpe is one of the best I have worked in and coupled with a fantastic layout showing every type of target, why visit any where else in the area. One of the best grounds and facilities in the UK. (Great sausage rolls.) Sincere thanks to all at Grimsthorpe and I have already been asked to return, details of a second visit to be revealed shortly. 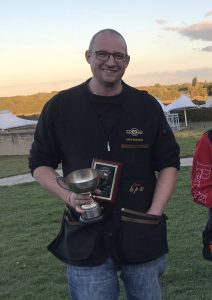 Another great win for Dave Simmons at Bisley yesterday. 96/100 to win the South East inter counties ABT championship with his trusted HPX DSR. Well done Dave, keep it up. 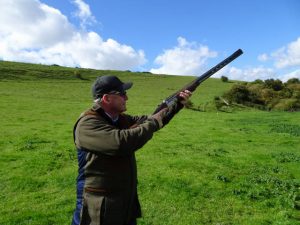 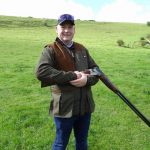 A relatively new shooter, Ian Mawhinney, has taken delivery of his new P & V HVR.  Does he like it? I think the pictures tells it all.  (Great ready position Ian.) 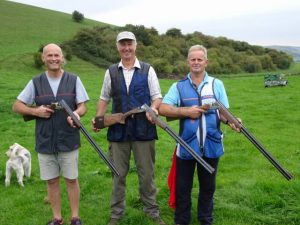 Three great Sussex shooters all now with the HVR

Kenny Bennett, Andrew Simmons and Grahame Cudlipp have all converted to the P & V HVR. Their comments regarding performance of this now exceptionally special design should alone be enough to take them to the top. The best sporting shotgun ever? Could be. Better come and try it! 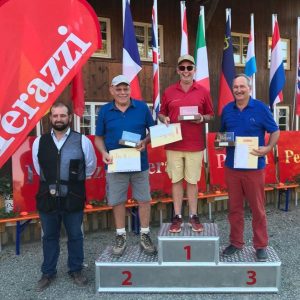 Another success for Kenny

Congratulations to Kenny Bennett (in the red T shirt) who has just won the Perazzi veterans 2018 cup in Dornsberg Germany on 8th September using his Perazzi HPX/RSR.  Another great win !!! for Kenny and for the RSR.

I anm pleased to report that the patent application for my HVR design has gone through its normal time scale and it has been approved by the Intellectual Property Office, patent number GB2547218.  This design has now been received exceptionally well by both the clay and game shooters and already has a substantial reputation for delivering a performance and target vision superior to other designs.  If you are thinking of upgrading your gun and shooting performance, come and try this design and experience what the HVR has to offer.